Home » Blog » Do You Have Some Liposuction Questions?

Do You Have Some Liposuction Questions? 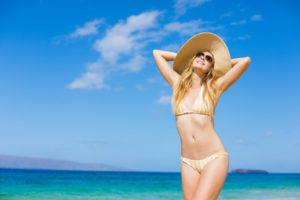 Year in and year out, liposuction is usually one of the two or three popular cosmetic surgeries performed in Canada, regardless of how the Flames are playing! The reason for its popularity is simple really — everyone, no matter what shape they are in, has pockets of fat that are almost impossible to get rid of with changes in diet and exercise. Liposuction is the way to make those pockets go away.

Liposuction is very popular at our practice, so Dr. Perron would like to offer some answers to typical questions raised with the procedure.

Will the fat cells grow back after liposuction?

As you would imagine, the fat cells that are suctioned away with liposuction are gone permanently. And fat is less likely to rebuild in the areas treated. However, if the patient then proceeds to gain a significant amount of weight, say 10% of his or her body weight, then new fat cells can develop.  But if the patient doesn’t gain weight the new contour is permanent.

If I gain weight does the fat come back to the treated areas?

Fat usually doesn’t return in the treated areas provided the patient doesn’t gain a significant amount of weight. Lesser weight gains will have fat that accumulates in untreated areas.

What if I get pregnant after liposuction?

While pregnancy involves weight gain, it doesn’t automatically affect the results of your liposuction. If you have liposuction and later become pregnant, you’ll gain weight, obviously. But if you then lose the weight from your pregnancy, your original liposuction improvements will return, just as if you had not become pregnant. So the decision to have liposuction doesn’t need to be tied to whether you want to have children or not down the road.

How many pounds of fat can be removed?

How long will it take to see results?

Most patients will see 90 percent of their ultimate liposuction results within one to three months after surgery. For the first few weeks after surgery there will be postoperative swelling. The amount and duration of swelling is predicated on how large the areas treated by Dr. Perron, and the technique used.

Will liposuction help my cellulite?

No. Cellulite is caused by the way a woman’s skin is stratified. It has nothing to do with fat pockets, so liposuction has no effect on cellulite.