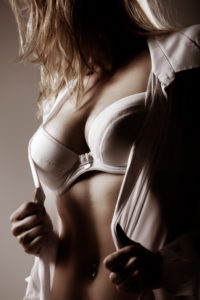 Is this true? Since a breast lift does remove excess tissue to return the breasts to a higher position on the chest, could it also decrease size?

That was precisely the point of a study by the American Society of Plastic Surgeons on breast lifts and bra cup sizes. The association sought to address these perceptions about this popular procedure.

The report found that following a breast lift, women reported they were wearing a smaller bra, with an average decrease of one bra cup size. But this is where the study got interesting. It found that the difference reflects the changing profile of the breasts rather than a true reduction in breast size.

The study was conducted at New York University, and its results were published in Plastic and Reconstructive Surgery, the official medical journal of the American Society of Plastic Surgeons in July 2014. The sample size was small, but the results should be interesting to anyone interested in this procedure.

The study conducted a follow-up survey of 20 women who had breast lift surgery, clinically termed mastopexy, at an average age of 47. All of the patients only had a breast lift, without augmentation or reduction. The study was conducted five years after their surgeries, and it asked the women about their bra cup size before versus after breast lift surgery. Weight changes and other relevant factors were taken into consideration.

The women reported an average decrease of approximately one cup size, for instance going from a D to a C. All of the women were wearing the same brand of bra, so there were no variations based upon manufacturer sizing differences.

Not a decrease, but a truer fit?

When looking at the results, the researchers wondered why, if the breasts were only lifted and not reduced, was there a change in cup size? The authors of the study chalked this up to the correct bra fit and patient comfort. It said, “It is well known that most women do not wear the correct bra size.”

The authors attributed the bra size issues to the difference in the shape of the breasts before and after a lift. Women opting for a breast lift have ptosis (sagging) of the breasts from pregnancy, breastfeeding, and normal aging. The study says, “We contend that the ptotic breast fills out a larger (than actual) brassiere cup size.” This is probably due to more of the breast mass sitting lower on the chest. A larger cup-size bra may be more comfortable in this situation. When the breasts are raised, more mass sits higher, so women opt to have a smaller cup size for reasons of comfort.

So, it’s not a matter of losing size; it’s a matter of raising the breast mass to a higher profile, which is exactly the reason a woman opts for a breast lift. As a final note, all of the 20 women in the study said they were satisfied with the results of their breast lift surgery.

Breasts lifts are popular procedures with Dr. Perron’s patients. If you’re depressed by your drooping breasts, a breast lift can be a great procedure for you. Call us at (403) 228-7076 to schedule a consultation with Dr. Perron.